Why you'd be NUTS to not eat nuts 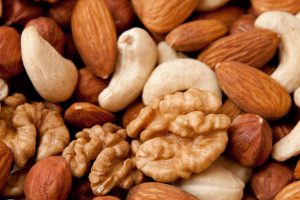 In my book, few things beat a fistful of nuts for a filling and delicious snack. And since they're packed with protein, good fats, and healthy fibre, nuts aren't just tasty, they're good for you, too.

Now Harvard researchers say they're not just good for you, they could literally add years to your life.

More on that exciting new finding in a moment, but first let's look at what we already know about nuts.

Over three years ago, I told you about the humble walnut's apparent ability to reduce stress levels and lower blood pressuure. Volunteers who ate the nuts had improved blood pressure numbers during two different types of stress tests.

And a more recent study, published in the Journal of Nutrition, found that snacking on walnuts could drive down a woman's diabetes risk by as much as 24 percent.

Live longer and healthier with nuts

In fact, at least 57 clinical trials have found that nuts may help protect you against heart disease, and a stack of others have linked nut eating with a reduced risk of cancer and diabetes. And with that kind of track record, it's really no surprise that yet another study has confirmed that one of my favorite snack foods is good for you.

But what did surprise everyone--including those Harvard researchers, no doubt--was just how impressive the numbers that came out of this massive study were.

The carefully designed study, which tracked 119,000 men and women over 30 years, found that those who ate nuts almost daily were an astounding 20 percent less likely to die from any cause during the three-decade long study.

And the impressive nut news didn't stop there... not by a long shot.

Oh, and if you've been afraid to indulge in nuts because they're high in fat, I've got great news for you. The nut eaters stayed slimmer than the non-nut eaters!

That's right, eating nuts will NOT make you fat, my friend.

As I've explained before, nuts are rich in the good-for-you monounsaturated fats. Heck, even the very mainstream American Heart Association admits the kind of fats found in nuts are heart healthy and can help you reduce your cholesterol while lowering your risk for heart disease and stroke.

And...you might want to sit down for this one... the usually clueless folks over at the FDA even stood up for nuts way back in 2003, when they recommended them as part of a diet to help reduce heart disease.

Honestly, with results like these, unless you happen to be allergic to them, you'd have to be nuts to not include nuts in your diet.

I do, however, need to mention two things about the Harvard study that you should keep in mind.

First of all, while it was well-designed and solid, this was an observational study. And as I've explained many times before, observational studies can only show an association or connection between two things. They're not designed to prove cause and effect. (For instance, those nut eaters also ate more healthy fruits and veggies.)

That doesn't erase any of the positives about nuts, but it's good to know.

Second, the Harvard researchers made one HUGE misstep with their study. Unfortunately, they accepted some funding from the International Tree Nut Council Nutrition Research and Education Foundation.

Now don't get me wrong, I don't have anything against the Tree Nut Council folks. They run a fine non-profit organization. But once they forked over some money to Harvard it became much easier for naysayers to try to question the findings.

Luckily, nuts already have a ton of solid research backing up their health value, so it's pretty clear that these latest findings--published in The New England Journal of Medicine--only add to that growing stack.

This entry was posted in Heart Health, Weight Loss on 23rd May 2017 by nutriplus. ← Previous Post Next Post →

If you have a media code that you received with a catalogue or insert, enter below...

Sign up to our Health Breakthroughs e-newsletter and start saving up to 30% on your favourite products!